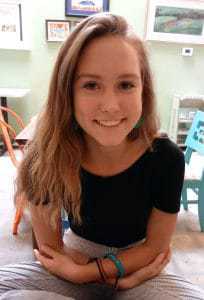 I interviewed a young writer friend of mine today. Her name is Elsa. She’s fifteen.

We’re from the same tribe; we love writing.

Elsa shared with me, telling me about the dystopian novel she’s writing and I’m so excited for her! The project sounds huge yet it’s clearly manageable in her capable hands. She’s got many things charted out, yet she’s open to discovering what’s next.

I love a lot of things about her stories and I’m really pleased to find her creating a fictional world with characters I’d like to meet. There’s Cate and Jack, both seventeen years old.

Jack’s cynical, determined, loyal, and funny. He’s also the son of high government officials who are interested in understanding the mind of people just like Cate.

Jack’s mission is to get close to Cate, to learn how she thinks, and to report this back so the government can better understand the people who think similarly to her.

When Elsa told me that she was writing in the dystopian genre I was surprised. I’m not sure why. Maybe it’s because I stereotyped that an evil or corrupt world is best created by a damaged writer with a scattered scarred past who has experienced emotional, mental, and physical abuse. Of course, that’s not true.

Great writers use their imagination. Check. Elsa uses that characteristic!

Successful writers love to write and make writing a priority every day. Check. Elsa is dedicated to her work. She schedules her writing time. You might see her at a coffee shop with earbuds listening to her writing playlist while working on her laptop.

Determined writers figure things out. Check, again. Elsa has worked to develop a detailed plot line she can follow, and knows how her book will end. I hope to be one of the first people to read it once it’s completed.

Elsa reminds me that creative writing comes from a strong personal drive to write and to tell stories. In her case, she hopes that her novel will help open the minds of people who read it and inspire them to use their imagination and become more aware of who they are and what is around them.

In Elsa’s world the government feels threatened by abstract thinkers who are potential risks to the current order.

I also learned that the dystopian world Elsa’s created doesn’t take place in a post-nuclear apocalyptic setting with burning cities, warring nations, or revolutionary battles. Instead, the setting is our world exactly as it is now. Right here. Right now. On one level it’s pretty simple: We, the citizens of Elsa’s world, don’t know what nefarious things the government is doing because the government covers them up with subliminal messages and bold lies.

Elsa’s imagination goes wild while creating her dystopian world. This is the world, she believes, that will be the most inviting. Once the reader enters Elsa’s novel, then author Elsa will show the formidable challenges a sixteen-year-old girl will need to encounter, overcome, and win.

I asked Elsa if she knew when she first wanted to be an author. She smiled, and said yes. She recalled when she was in third grade and told her grandmother that she wanted to be either a teacher or a writer.

At the end of fifth grade, Elsa’s teacher asked if it would be okay for her to print out all of Elsa’s writings as examples to be used for future classes. That teacher supported Elsa’s choice for a life of writing. That teacher, one person, made a difference.

If you prefer to listen to my blog posts, you can do so … END_OF_DOCUMENT_TOKEN_TO_BE_REPLACED