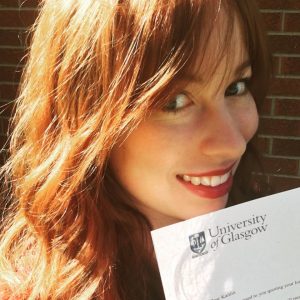 I had to learn the answer to the question. What motivated Kaitlin to go to Scotland?

It’s normal for people to dream and to have things on their bucket list—what they want to do before they kick the bucket. But Kaitlin isn’t just dreaming. She’s making it happen!

Everyone dreams. Every young person has plans for what they want to do someday. Two years ago Kaitlin visited Scotland and England. Today, Kaitlin’s on her way to graduate school at the University of Glasgow, Scotland.

Let’s hear it for Kaitlin! Hip-hip-hurrah!

Sometimes people can remember the exact moment that an idea formed in their brain. They recall what influenced them to make a decision. Other times, there’s seemingly no way to piece together the multitude of events that helped shape an idea.

Kaitlin developed an incredible thirst for British literature and culture from first watching an American musical, and later, in fifth grade, was mesmerized by an adaptation done by the BBC (British Broadcasting Company) checked out from the library.

Have you ever heard of the 1954 movie titled Brigadoon? This musical starring Gene Kelly follows two Americans lost in the mists of the Scottish Highlands when they stumble across Brigadoon, a village from the 1700s that appears once every hundred years. Tommy (Gene Kelly) falls in love with a woman from Brigadoon, Fiona, and he must decide whether to stay with the love of his life, or return to New York City.

“It’s very romantic—the heather-strewn hills, the mist, the music and lyrics. It does rely on Scottish stereotypes, but therein lies its charm, I think,” Kaitlin informs me.

She watched Brigadoon repeatedly over the years and saw the stage play in high school. Kaitlin even revisited Brigadoon in a scholarly way in college (double major: English and Theater) when she chose it as her senior project, researching the inspirations as well as analyzing the historical and cultural inaccuracies of the musical.

Now, how did Kaitlin get interested in the United Kingdom (UK) in general?

Kaitlin remembers stopping at the library with her mother after playing in a fifth grade basketball game. Kaitlin was considering a video on the ancient Olympics when her mother pulled out a DVD of BBC’s Pride and Prejudice from the shelf and handed the videos to Kaitlin, saying, “I heard this is good.”

The story changed Kaitlin forever! Adapted from Jane Austen’s 1813 novel Pride and Prejudice, the 1995 BBC version follows Elizabeth Bennet as she navigates through Regency English society. She soon makes the acquaintance of wealthy and proud Mr. Darcy (played by Colin Firth) who makes a bad first impression, and the six-hour series follows the two as they overcome their prides and prejudices and consequently fall in love.

“The DVD only had the first three episodes of the six-part series,” Kaitlin remarked, “and it abruptly ended with Elizabeth rejecting Mr. Darcy’s marriage proposal. I remember yelling at the TV, ‘No! There’s got to be more!”

Kaitlin then returned to the library the next day for the remaining episodes of Pride and Prejudice. Jane Austen and her influence followed Kaitlin all through middle and high school, as Kaitlin read and watched through almost every novel, adaptation, and spinoff she could get her hands on. After she graduated college Kaitlin even made a pilgrimage to Lyme Park in England, the filming location of Mr. Darcy’s grand estate, Pemberley.

What started as a singular Austen-obsession in childhood gradually rounded out into a deep appreciation of the broader canon of British Literature- from Shakespeare to Robert Burns, The Secret Garden to Lady Chatterley’s Lover, Kaitlin reverently devoured as many Classics as she could. One stood out among the rest though, the book that she hails as her favorite book of all time, Jane Eyre (1847) by Charlotte Brontë.

I asked Kaitlin this question: “If you were writing gothic fiction and you were the central character, what would be the premise or plot of your book?”

She didn’t know about the plot of her book but she was able to clearly picture a scene in the novel. There’d be mist, hedge mazes, secret passages and she’s in a long, flowing nightgown, holding a candelabra as lightning flashes in the dark sky.

“Kaitlin, since I have every reason to believe you’re a romantic, do you ever imagine meeting a Mr. Rochester (a fictional character in Jane Eyre)? If so, and if you’re willing to share, what would he be like? For him to interest you, would he need to be a romantic?”

“In regards to the character, I love Mr. Rochester because from the beginning he treats Jane as an equal and they recognize each other as such; that’s something I’m quite passionate about. There’s a passage when he’s proposing to Jane, he declares that she is his equal and his likeness, his second self and best earthly companion, which is quite lovely.”

Kaitlin would want a person who was intelligent, had a love of adventure, and was kind. I also learned from Kaitlin that if a Mr. Rochester and Kaitlin were compatible then no, he wouldn’t necessarily have to be a romantic.

Since I knew that Kaitlin enjoys gothic fiction and that she’s read Dracula (1897) by Bram Stoker, I couldn’t help myself. I asked her this: “If during your stay in Glasgow your roommate, let’s call her Mina Harker (a fictional character in Dracula), invites you to join a secret group of vampire hunters, what do you think you’d do or say?”

“Oh, no! Mina! (Kaitlin laughs) I would seize the opportunity. I would make sure I was prepared; I’d have my garlic and my crucifix and go.”

I doubt Kaitlin will be vampire hunting but I’m sure she’ll be busy at the University of Glasgow, working for her Masters in Museum Education. With an appreciation of history and culture, she’s looking forward to some hands-on experience and serving in museum work practice.

Two years ago, when Kaitlin traveled in Scotland, she remembers seeing this same university and thinking: “I wonder what it would be like to study here?” 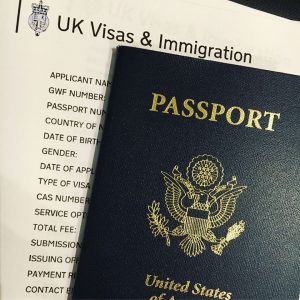 “This is an opportunity,” states Kaitlin. “I’m not tied down. It’s the right time.”

As some Scotts would say: “Hae a guid journey.”

If you prefer to listen to my blog posts, you can do so … END_OF_DOCUMENT_TOKEN_TO_BE_REPLACED