As a child I played soldier. With friends in my neighborhood we had gun battles with toy guns. We repeatedly killed and died. I also bought toy soldiers and played with them. And when my father opened his war trunk—off limits to me—I listened.

The war trunk held many of Dad’s memories from World War II when he served in the European Theater. He was an Army medic and supervisor of evacuation of combat casualties. 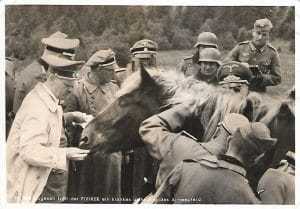 I’m holding a German propaganda postcard that shows der Fuhrer (leader) Adolf Hitler feeding a horse while visiting troops. Many of the other propaganda cards I’ve seen show Hitler welcoming young children and mothers who are beaming with pride to be in his presence. Of course, the idea behind the cards was to show Hitler as caring and magnanimous, not cruel or unstable.

Both sides of my postcard are a history lesson.

The reverse side documents that my father, Harold L. Potter, 1st Lt., was corresponding with his fiancé, Nell Armstrong, who lived in Galesburg, Illinois. The postcard was written November 25, 1944. It was received over two months later on January 30, 1945. Talk about “snail mail.”

It’s difficult to imagine today, but all the mail sent by our troops was censured in order to guard against the enemy learning about Allied military buildup and strategy. As a result, the letters my father sent home never referred to his location or planning.

There’s an ink stamp on the postcard showing that it was approved for mailing.

Since mail was often held up for long periods of time, Hal and Nell agreed to always number their correspondence (especially on the outside of letters) so that they could read them in order, once they finally arrived. One time, after the Normandy invasion, Nell received forty letters at once. 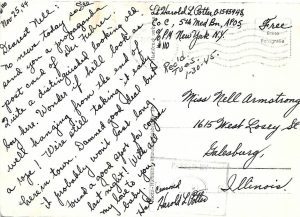 Like today’s military, postage was not required on the postcard sent by 1st Lt. Potter. Instead, he’s written the word, “Free.” And for a return address, he’s given his Army Post Office (APO) in New York City, NY.

“Dearest Nell, No news today so I’ll send you a propaganda post card of Der Fuhrer. Quite a distinguished looking old boy here. Wonder if he’ll look as well hanging from the end of a rope! We’re still taking it easy here in town. Damned good deal but it probably won’t last long. Found a good spot for cognac last night! With all my love to you, baby, Hal”

If you prefer to listen to my blog posts, you can do so … END_OF_DOCUMENT_TOKEN_TO_BE_REPLACED