·  Suicide is a Permanent Solution to a Temporary Problem  · 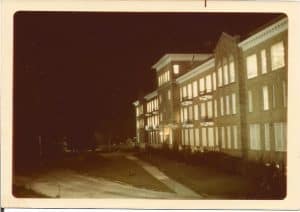 I met Joe back in 1973 in prison. No, we weren’t cell mates serving time. We were volunteers wanting to make a difference. VISTA, acronym for Volunteers In Service To America, was the domestic side of the Peace Corps. We had signed up independently for a year of service as volunteers in Georgia.

At the Georgia Industrial Institute (GII), a.k.a. men’s prison, in Alto, GA, our larger team’s mission was to set up a pre-release program for inmates approaching their release date. The goal was to help prepare the men to function within the law, and to be successful in the “outside” world without resorting to crime. In other words, to reduce the extremely high rate of recidivism.

We also had a mini-caseload of inmates we counseled.

I’ve written a poem about Joe who left VISTA and Georgia. Besides his death by suicide, the poem mentions others who were desperate and alone in their final moments.

For people in many careers, handling death comes with the job. These deaths are representative of the mind-numbing investigations I worked as a deputy sheriff.

I never heard a career cop say he or she wanted to work one more death case–whether a fatality wreck, suicide, or homicide. Each one, for sure, sucked a little life-breath out of me, right down to my bone marrow.

Lit like a lantern,
Sharp as a knife,
Ready to wrestle,
Eyes so bright.

Wasted and smiling,
Talking of dope.
Wearing a tie,
Looking a joke.

Making changes,
Sacrifices to him.
Others saw it,
As no confirmation.

Unable to take it,
The Pressures of Peer.
Wanting to be seen,
As a young savior.

Stormed out one day,
With his girl and best friend.
Becky and Buffalo,
A part of the blend.

Left behind,
His vest and his tie.
Part of the game,
Part of his try.

I remember the trunk,
And his weapon of war.
The rifle was special,
I remember its bore.

Too different than most,
Alike to far few.
Joe left Georgia,
Found death in the truth.

Suicide again,
You heard me right.
One due to cancer,
The other — family fight.

Brawner in the bathroom,
With a twenty-two,
Arlen in the stairwell,
In a dog collar noose.

Uniforms, wakes,
Families in fear.
A lost one, found one,
Children in tears.

Too different than most,
Alike to far few.
Joe left Georgia,
Found death in the truth.

Just a reminder about suicide: most people who are hurting do not want to die, they’re looking for a way to stop the pain. Help is available.

If you feel like no one is approachable–not even a friend or family member–then understand, there are toll-free hotlines available.

One number to call is the National Suicide Prevention Lifeline at 1-800-273-8255. They promise this: “We can help prevent suicide. The Lifeline provides 24/7, free and confidential support for people in distress, prevention and crisis resources for you or your loved ones, and best practices for professionals.”

Remember, suicide is a permanent solution to a (usually) temporary problem. Wait an hour. Wait a day. Ask for help. Ask again. Stick around. You can help yourself and make a difference. Some day you might even write about your trauma and help others who are desperate and in pain.

If you prefer to listen to my blog posts, you can do so … END_OF_DOCUMENT_TOKEN_TO_BE_REPLACED