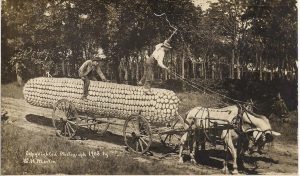 My Grandpa Clarence used to talk about the fertile farmland in western Kansas before the drought, grasshoppers, jack rabbits, and dust storms ravaged the country.

He said he and the family had some extremely productive years for over a decade before “The Crash.”

When our family visited, just in case I doubted him, he would dig out his photographs and hand them to me as positive proof. “A picture’s worth a thousand words,” he’d advise, then silently begin rolling a cigarette and leaning back in his rocking chair.

Now, all these years later, with him gone since 1973, I hold the evidence of those prosperous times.

Grandpa left the treasured photographs to me even though my dad had been born and raised there in Morton County, near Rolla. I guess Grandpa figured my dad, Harold, would never forget those memorable good times and stressful bad times.

Like I said, Grandpa gave them to me because I was so fascinated with the remarkable visual stories. 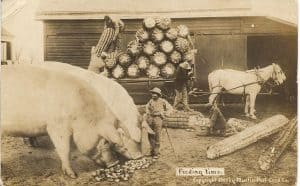 I’ve treasured these photographs of the Potter farmstead and farm animals for nearly fifty years.

The images are of a time in history when the horse was still reliable, cheap transportation. Crops were successful without dangerous pesticides or genetic modification.

Poultry, pigs, and cattle added weight on the free range, not like today when the animals are locked in buildings in cramped cages with artificial light.

Independent farmers today care just as much about the land, the crops, and good husbandry, and they are caught in a dilemma called survival. They are under a tremendous amount of pressure to eke out a profit while expenses continue to rise and crop prices remain low.

“How is success possible?” I ask. Then I thank a farmer: “I appreciate you for your dedication and for feeding me. I just wish you would benefit proportionally when grocery store prices increase.”

Like my grandparents, the few independent farmers that remain on the land today love the soil so much that many are dangerously in debt. They’re working other jobs just to have an outside chance until the day things “turn around.” 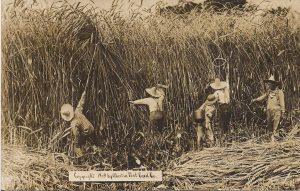 Maybe these photographs are one of the reasons Grandpa never talked too much about his years in western Kansas. Maybe that’s why he gave them to me while he was still alive.

The productive years were like a beautiful bubble that people didn’t want to believe would ever pop.

Sadly, when Grandpa recalled the good times, he would also be reminded of what he had lost and what he had endured: bad, long, crushing years.

One day in western Kansas, Grandpa was out working the field and the weather changed; it was a sign that Rolla and a half-dozen states would soon suffer an environmental disaster the likes no one had seen before.

The hungry grasshoppers and jack rabbits arrived in need of substance. The market crashed. Proud people learned that they had gotten greedy with god’s land, and there would be a price to pay.

The years of struggle, hope, and broken spirits will be further examined in the next blog. As proof, I’ll share more of my faded photographs.

If you prefer to listen to my blog posts, you can do so … END_OF_DOCUMENT_TOKEN_TO_BE_REPLACED