Soul by Soul: Life Inside the Antebellum Slave Market 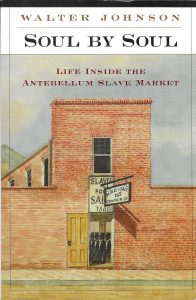 I’ve just completed reading the best book ever about understanding slavery. Soul by Soul: Life Inside the Antebellum Slave Market (1999) isn’t a new book, but it’s a classic.

The author, Walter Johnson, brilliantly examines the slave market in New Orleans, the largest in North America during the nineteenth-century.

Through exhaustive research using primary resources, Johnson shares the words of enslaved Africans or descendants of Africans, and the buyers and sellers of slaves, to give an incredible picture of what it was like to be a person involved in the slave trade.

Johnson takes the reader into the slave pens of New Orleans and shows the reader how enslaved people prepared to be purchased. We learn the tricks of the trade used by the slave trader. We understand the thinking of the would-be buyer. We feel the dread of the slave preparing to be sold, but we also learn of the manipulative tactics used by Black people to shape the sale to suit themselves.

I always knew that slavery was brutal and inhumane, but Soul by Soul helped me better understand the institution of slavery by hearing the voices of the participants. Now, I recognize how the buyers of slaves weren’t just using forced labor to become wealthy; it was also about their egos and dreams of rising in the Southern hierarchy, the social ladder, at the expense of others. It was about their need to be somebody.

Ironically, the more the white slaveowner purchased slaves in order to become economically independent and praised socially, the greater he was forced to rely on his enslaved workforce. (There were free Blacks who owned Black slaves, but that’s another story.)

Another important lesson I learned from Soul by Soul, was how the enslaved people of color were constantly resisting as they fought to survive both personally and as a community. Often, the slave became the master.

Jim Potter—author of Taking Back the Bullet: Trajectories of Self-Discovery

If you prefer to listen to my blog posts, you can do so … END_OF_DOCUMENT_TOKEN_TO_BE_REPLACED