· Smile Across the Nile: Bellygrammed by Alexandria  · 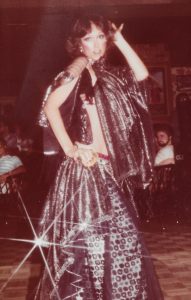 Surprise birthday parties have been planned and carried out for centuries. The most recognized song in the English language, “Happy Birthday,” is sung to birthday honorees prior to the opening of cards and gifts. Fiery trick candles, planted in sweet icing on celebratory cakes, are blown out once, then blown out again.

During the late 1970s, singing telegrams—originally popular in the 30s—were trending again, then balloon-o-grams, then bellygrams where a belly dancer was hired to deliver a celebration message.

J. Alex Potter, aka Alexandria, was well-known in central Kansas, especially in Reno County, as a belly dancer who delivered dancing bellygrams during the late 1970s through the mid-1980s.

Today, as I glance through her scrapbook of newspaper articles and photographs, I’m reminded how Alexandria danced for surprised subjects, usually male, who were sitting down so they wouldn’t fall down or bolt and run.

Alexandria was quoted in a (November 23) 1979 Hutchinson News article reported by Connie Harris. The belly dancer said: “It’s not a long dance recital. Mostly what people want is to surprise and embarrass the person. They’re usually waiting with cameras, and all of the person’s friends are there.”

The performer also made some observations: “The recipient usually doesn’t enjoy the message as much as the sender,” and he’s “usually immensely embarrassed. He may enjoy it some, but he doesn’t enjoy being the point of attention. He doesn’t know what to do, and he wishes it wouldn’t last so long.”

Alexandria concluded: “I dance some spirited numbers – happy, lively ones – but the music isn’t all that important. Like I said, the people aren’t paying for a dance concert. They just want to see the person’s reaction.”

A lot of people had a lot of fun planning birthday greetings, nearly always scheduled in a public place, often a community’s downtown café or where the honoree was employed.

I’m still surprised that the bellygram fad lasted for at least a half-dozen years. Alexandria’s business was steady. She’d average two or three bellygrams a week, but there were some days, especially around the holidays, when she could schedule six or seven bellygrams back-to-back in a single day. Not a bad income when you consider the price was $35 for local delivery.

Of course there were expenses. Besides travel and telephone costs, the performer created a closet full of costumes she made from Middle Eastern fabric, purchased a steady stream of cosmetics, and updated her belly dance record albums and tapes.

It was business, but for me it was always fun to participate in the entertainment. Occasionally, I dressed in costume as Alexandria’s escort, but fortunately for everyone, I never danced.

I still marvel that we—I was her driver who also operated our boom box—would travel long distances for a show that lasted only four or five minutes. At the bellygram’s completion, Alexandria would deliver a personalized card and read the message from the perpetrator.

The newspaper clippings from local papers like The Lyons Daily News, (Larned’s) Tiller & Toiler, The Ellinwood Leader, (Ashland’s) The Clark County Clipper, and the Hutchinson News remind me how bellygram trips to western Kansas would take several hours of road time.

The Lyons Daily News reported in a headline on January 5, 1981:

“It had to happen sooner or later. Bellygrams have reached Lyons, leaving only the pie-in-the-face fad with ground still to break.

“The milestone occurred this morning at Branson Truck Lines, when Office Manager Loren Myers suddenly found himself one of two principles in the celebration of his 35th birthday anniversary.

“In walked sleek Alexandria, her parts attractively attired and appealingly churning to belly-dancing music coming from a portable stereo carried by an accomplice.

“Myers got the full treatment, including the veil wrapped around his neck and head that until the end alluringly shielded Alexandria from full view. During the performance Myers’ expression ranged from droll, at the start, to a broad smile near the end that some interpreted as glee.”

“No, the above scene didn’t take place in Egypt, but in nearby Sitka, Kansas, Monday evening where supper guests were entertained by ‘Alexandria,’ at the Old Weigh Station Café. Alexandria, her stage name, hails from South Hutchinson, Kansas, where she teaches belly dancing through the Hutchinson Recreation Commission, operates a stained glass business, and teaches drawing at Hutchinson Community College.”

“Diners at Sitka enjoyed Alexandria’s brief performance, including Ashland Attorney Virgil Severe, in whose honor her visit was arranged as a surprise. The fact that she would be doing her belly dancing routine was known in advance to many persons, however, and the café was filled to capacity. Her visit to Sitka was arranged by the Bob Bares.”

“Alexandria was accompanied by her husband, Jim Potter, who stood close by during the performance and provided taped music to accompany her routines in the unusual and entertaining art form of belly dancing.”

“The young couple makes regular appearances around Hutchinson and other locations. They were in Protection some weeks ago for a birthday celebration.”

Sometimes, days after the special event, Alexandria would receive thank you letters via the U.S. Mail. One communication said: “Just a note to say thanks for helping make our party a big success. The little town of Larned is still talking about the party and the belly dancer. Have heard nothing but good comments about your performance.

“It was nice meeting you . . . Keep in touch and thanks again for giving a ‘clean’ dance!!

Alexandria was filmed by local TV stations, including Channel 8, and Channel 10’s PM Magazine. She gained national recognition when a New York crew from MacNeil/Lehrer Productions arrived in Hutchinson to videotape Alexandria for a segment in their newscast.

After observing a belly dance workshop taught in part by Alexandria in 1983, a Hutchinson News article, written by Millie Nunemaker, quoted the belly dancer:

“Alexandria said the belly dance has been practiced by women in the Middle East for many years. Living in harems as many did,” she said, “they had to devise their own entertainments. Belly dancing, dancing for each other, was one of the entertainments they chose.

“Threads of the sorority of women are strong in the belly dancing background because it started with women dancing for each other. The men always enjoy our dances, but for me, when a woman tells me that she enjoyed my dancing that is the ultimate compliment,” Alexandria said.

“Alexandria emphasized that belly dancing is not a sexual invitation, even though the dance does involve the torso.

“It is a disciplined art form, the same as ballet is,” she said. “To me, it is the real essence of being female. It is a lovely thing to share with other women.”

Alexandria retired from belly dancing when she started focusing on her pastel painting. Even though she stopped advertising, years afterward she still had requests via phone.

Someone would call wanting to hire Alexandria because, “you danced for my father fifteen years ago and he’s turning ninety now.” Alex would politely decline and say, “I may be a young woman to your father, but remember, I’m fifteen years older too!”

Alexandria hung up her belly dance costume long ago, our boom box is buried at the county landfill, and we’re both collecting Social Security.

Instead of calls wanting to hire her, now people say, “You’re Alexandria! I have pictures of you when you danced for . . .” (so and so)

Please note: If you want to read a superb published letter, written by Alexandria in 1982, defending belly dancing in Kansas, click the following link.

Or, if you prefer to hear the audio blog, click on the horizontal bar below this paragraph.

If you prefer to listen to my blog posts, you can do so … END_OF_DOCUMENT_TOKEN_TO_BE_REPLACED