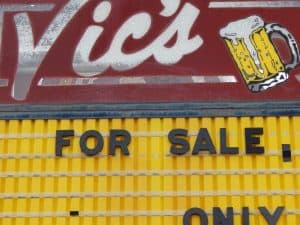 Recently, in a Hutchinson News article, there was a story about a long-time bar being forced to close due to dwindling customer support.

The owner was sharing a lot of memories with the reporter, but there was one that I knew immediately would fit into many a novel, maybe one of mine.

The owner recalled how when she and all her female employees took the night off to attend an event, they left a few male employees in charge at the watering hole.

Here’s the rest of the story as reported by Adam Stewart. The owner “left three big, burly men to tend bar and wait tables in their absence, dressed as waitresses.” When the owner “got back to Vic’s, she found the bartenders dancing, singing karaoke and buying tequila shots to share with any money they got in tips, which customers found to be a laugh riot.

“The place was packed!” the owner recalled.

Now, if you were writing a novel, wouldn’t it be fun to incorporate a story like this into your plot? It could easily turn into an exciting chapter.

I take information like this and then begin asking “What if?” questions. For example, What if, when the owner returned, all the money in the cash register was missing? Who would be a suspect? Would the thief be caught? Would the burly-men waitresses be fired?

Since the news is often about catastrophes, it’s no surprise to hear or read about all kinds of fatal accidents.

One of my little clippings is titled: “Man dies after being hit by train in Wichita.” The brief story informs the reader that the man was hit early in the morning by a Burlington Northern train traveling about 25 mph.

Police commented that the deceased had been identified. He was “apparently sleeping on the tracks when the train hit him.”

When I read this, I want to know about people sleeping on railroad tracks.

I want to know why the man didn’t wake up before he was hit. Or did he?

In my novel, I might show how the police officer, reluctantly taking the report, is being forced to deal with one more dead body during his PTSD career. 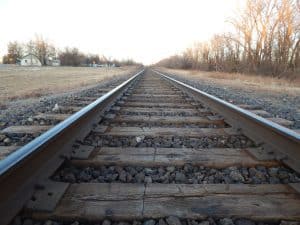 To add a layer of tension, maybe the officer has just returned to work after burying a loved one, or the train’s engineer doesn’t seem to care about the fatality.

The officer and engineer could easily clash.

If I wanted to inform the reader about poverty, homelessness, and the lack of affordable housing, then I’d have the officer interviewing the victim’s friends at a soup kitchen and have him attempting to locate surviving family members.

I might show an emotional scene of the officer informing the parents of their son’s death. (Had they kicked him out of the house the night before?) There are so many possibilities!

Where would you take this story?

If you prefer to listen to my blog posts, you can do so … END_OF_DOCUMENT_TOKEN_TO_BE_REPLACED