My great-grandfather, James Chamellis Potter, participated in the Cherokee Outlet land run, was a blacksmith and marshal in Nickerson, and suffered a debilitating stroke years before his death.

It’s mind-boggling for me to grasp that I knew someone, anyone, who was alive during the Civil War era! Think about that, over 150 years ago!

Mellis was born February 6, 1865 near Tiffin, Johnson County, Iowa. He spent the first thirteen years of his life on the Iowa farm where he was born.

In 1877 the Potters preempted in Loda Township, Reno County. The following year J.C.’s parents, Adam and Rosannah (Layman) brought their family to work the land. Mellis attended school in a little sod schoolhouse in the neighborhood in which dried corn stalks were used as fuel.

James Chamellis and Eva Belle Dix were married in 1889. Her family had located to Reno County in 1878 and settled on a farm near Haven. They moved to Valley Township in 1884, then to a farm near Lerado in 1888.

On September 16, 1893, land was opened in the Cherokee Outlet of northern Oklahoma Territory. Mellis and his brother Elmer joined the rush to claim land. They selected sites in Woods County, now Alfalfa County. Mellis dismantled his home in Reno County, transported the material by wagon to Oklahoma and erected the new house.

Mellis was active in his community. He was a Democrat and an elder in the Christian Church of Nickerson. After retiring from farming in 1918, he was a blacksmith, marshal, councilman, and mayor (1937-1939) of Nickerson.

Read a 1939 newspaper article from the town’s official paper, the Nickerson Argosy:   mayorpotterissuesstatement

J.C. was an earnest advocate for prohibition and for years was a prominent member of the Anti-Horse Thief Association.

James Chamellis died March 5, 1955 in Nickerson. Eva, his wife, had preceded him in death, September 13, 1946, in Hutchinson. Both are buried in Memorial Park Cemetery near Hutchinson. 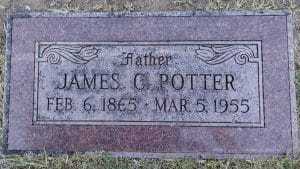 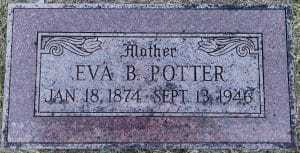 · History of Reno County, Kansas: Its People, Industries and Institutions (1917), by Sheridan Ploughe

· The Ancestors and Descendants of Adam Potter and Rosannah Layman (1983), by Harold L. Potter

If you prefer to listen to my blog posts, you can do so … END_OF_DOCUMENT_TOKEN_TO_BE_REPLACED