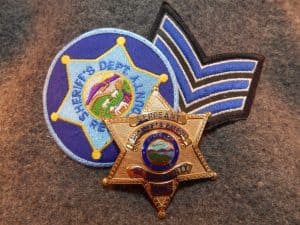 Having worked in law enforcement for over three decades, I tend to take some things for granted when it comes to terminology and police procedure.

This blog entry will be the first to focus on law enforcement, with the idea that it may be helpful to some writers who occasionally create stories about “cops and robbers” in their fiction.

In your writing it’s important to get the details correct because they’re important to the reader. When you’re setting a scene, you don’t want the reader to stop and say, “Wait! There’s no way that would happen!”

On this blog entry I’m going to cover some real basic terms and definitions. I intend to help writers, not insult them, so please, this is where I’m starting. If you find it too basic, then check back another time when I’ll be focusing on police procedure, technology, weapons, going to court, etc.

Police and cops are generic terms meaning law enforcement officers. One of your fictional characters might look out the window, see the good guys approaching up the road or down the sidewalk, and blurt out, “The cops are here! Hide the dope!” The anxiety is high as the cops (or police) approach the house.

Once the cars are in sight of the occupants, the suspects might identify the actual law enforcement agency by the vehicle’s decals or maybe by recognizing an officer from a prior arrest. These vehicles are often considered patrol cars, because they are marked.

Patrol officers regularly work traffic meaning they are working vehicle accidents and writing tickets, but they are also on the lookout for stolen cars, wanted criminals, and suspicious activity.

Your writing might show detectives wearing civilian clothes and driving unmarked cars as they follow a dastardly drug dealer downtown. 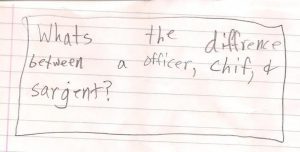 If you need to report a crime, and you live in the county (outside the municipality), then your county sheriff’s office (or central dispatch) will notify, assign, or dispatch an officer to talk to you.

When the officer arrives, the person reporting the crime might announce, “the sheriff’s here.” The first time I heard this, I was a bit surprised, because to me the sheriff meant my boss, the number one guy, our CEO.

So, if you’re in the county, the officer taking the report could generically be called “the police,” but more than likely the law enforcement officer would be referred to as “the sheriff,” or “deputy sheriff.”

In the city, the sheriff’s deputies aren’t making a lot of house calls unless the officers are following up a lead in a criminal investigation, or making an arrest on a warrant (a document issued by a government official authorizing the police to make an arrest).

It all comes down to jurisdiction. If you live in Cottonwood County, Kansas, in the town/city of Prairie Grove, the Prairie Grove Police Department has jurisdiction. This means they have the authority to enforce the laws for that municipality.

Being a sworn police officer, the police can also enforce city ordinances (ex. junk cars parked on property, music that is too loud at a party which is disturbing the neighbors) and state laws. But these same city cops cannot leave the city limits to enforce laws. They don’t have the legal authority.

However, deputy sheriff’s can enforce county ordinances and state laws anywhere in their county, including in towns and cities.

To take this a few steps further, the state highway patrol enforces laws anywhere in their state, and the Federal Bureau of Investigation or FBI, a federal agency, enforces laws all over the nation. 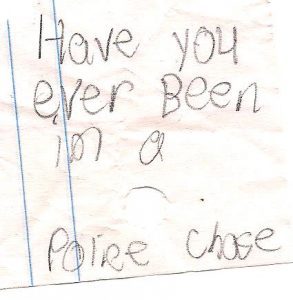 If you’re writing a police thriller, you might have a city cop attempt to stop the speeding suspect, maybe with a county officer as his or her backup.

(Here’s a common jurisdictional question that I’m asked: “What if an officer is chasing a speeding car and the car leaves the city, or county limits, does the officer need to stop at the boundary?” Answer: No, as long as the officers are in pursuit of a person who has committed a crime in their presence.)

In a future blog I’ll begin with a quick look at the difference between jail and prison, and how your fictional characters should not go to jail on an infraction violation, but how they might be locked up on a misdemeanor.

If they’ve committed a felony, then they should go directly to jail (without collecting $200), and later to prison, if they are found guilty.

If you prefer to listen to my blog posts, you can do so … END_OF_DOCUMENT_TOKEN_TO_BE_REPLACED