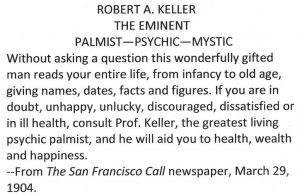 Do you enjoy historical research? I love it!

As I’ve mentioned before, I collect “Reward” postcards because they are an enjoyable slice of history. The cards describe people who are wanted for various crimes. My high-visibility favorites are jail escapees and murderers.

When I examine “Reward” cards, the descriptions make it easy for me to imagine the person wanted by the legal authorities. But, that’s just a start. I want to know so much more than what’s described on the postcard.

I want to discover information about the criminal, but I also desire to learn about the circumstances of the crime, and when possible, the victim. My favorite areas of interest are murder suspects (See “Best Character Descriptions: Wanted for Murder” https://jimpotterauthor.com/best-character-descriptions/) and their homicide victims.

Whenever my research of a “Wanted” card has lead me to discovering that the alleged criminal was caught, its been an exciting moment! 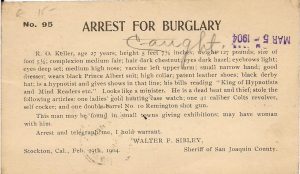 One postcard, in bold caps, declares: “ARREST FOR BURGLARY,” and later, lists the items stolen. We read the suspect’s name and his description!

At the bottom of the card we learn who wants him. In this case it’s the sheriff of San Joaquin County of Stockton, CA. The date reads February 29, 1904.

Most of my “Wanted” cards offer the amount of the reward as an enticement to get the public involved. This card offers no reward, but it might have been an oversight.

A few of my mini-wanted posters have the amount of the reward written in ink, as though it was an afterthought, or that law enforcement hadn’t raised the prize money before having the postcards run off at the local print shop.

But this card is priceless! The sheriff is looking for a highly visible showman who advertises as the “King of Hypnotists and Mind Readers.” He’s a sharp dresser, “looks like a minister,” and is a “deadbeat and thief.” Later, after being mailed and postmarked, someone has written a single word in cursive: “caught.”

To learn more about this suspect, Keller, I searched on-line, but this event had apparently never hit the internet. It’s ancient history and inconsequential to any chronicled criminal trends.

The best place to find old news is in old newspapers, and by contacting county and state historical societies.

In researching this card about a wanted hypnotist, I had the good pleasure of electronically meeting Jan Heinemann, curator of the Bremer County Historical Society (IA). She shared photos of the Fortner House hotel.

Several state historical societies offer free access and searches of their newspaper data bases. I choose not to use ancestry.com and newspapers.com due to the expense, but they are powerful research tools.

The US federal census records are also vital to learning details about people and their families. I couldn’t locate Keller, but I did “find” a cousin of his.

According to a 1907 newspaper article, a relative, Ruby Van Meter, was notified “by wire” of his death. At that time, she was living in Gracemount, OK. (The 1900 Census showed her, age 11, living with family in Decatur, Iowa. In the 1910 Census, at age 22, she resided in Caddo, Oklahoma.)

If you don’t know the date of the person’s death, try using findagrave.com. It’s a helpful, free service that continues to expand its database. Once you know a person’s date of death, obituaries are excellent places to gain clues to his or her life.

“HYPNOTIST, A SUICIDE,” the headline read (Evening Times-Republican, Marshalltown, IA, May 9, 1907). “V.W. Jerome Shoots Himself While Guest at Waverly Hotel,” the article continued. Jerome, also known as Keller, shot himself to death.

Keller left a note that was shared by a reporter in his published news story: “To whom it may concern: I’m tired of it all. This is a clear case of suicide.”

The newspaper article theorized that Keller, or Jerome, could have been despondent over a love affair or his business. He was apparently rejected by a young lady who he had met a week earlier in Sumner, Iowa. Or, he could have been depressed over his financial affairs. A poor showing to his most recent public exhibition had led to money being refunded to ticket holders.

In your research, be prepared for conflicting information. During my exploration on Keller, a.k.a. Jerome, the media used various names and spellings in reference to him.

I was surprised when the authorities discovered Keller’s real surname was Jerome.

Then, I was surprised again when I learned from Find A Grave that Jerome was buried “under” the name “R. O. Keller.”

If you prefer to listen to my blog posts, you can do so … END_OF_DOCUMENT_TOKEN_TO_BE_REPLACED