Too Bold to Hold

My “wanted for murder” postcard didn’t give the date of the criminal offense, but it did offer that Joe Mosley had been paroled from the State Industrial Reformatory at Hutchinson, Kansas, in 1909. Now he was wanted by the Chief of Police in Wichita, Kansas.

The postcard described Mosley as a black man, with black hair and eyes, height five feet four inches, weight 158 pounds. His head was “round” and his upper lip large; his nose large and flat; his hair short and kinky. He had numerous scars on his stomach “from lying on coal” and “numerous coal scars over both legs.”

True to my nature, questions about the crime popped in my head.

After searching Wichita newspapers I discovered that Mrs. Janie Edwards, nineteen, a “mulatto” woman from Chickasha, Oklahoma, had been shot to death August 3, 1912. Her body was discovered three days later buried in a shallow grave in a suburban garden in northeast Wichita when the property owner went to harvest sweet corn.

After Janie’s body was discovered on August 6, the police were called to investigate. The responders included city detective C. A. Bish, Wichita Chief of Police G. T. Cubbon, Sedgwick County Sheriff John Millhaubt, and Coroner M. M. McCollister. Soon thereafter the officers learned the victim had been shot in the heart.

A canvas of the neighborhood revealed that a person matching the description of Joseph Mosley had attempted to borrow a shovel at several houses the day of the murder. Finally, a spade was loaned out by a grocery store owner to a person matching Mosley’s description three blocks from the crime scene. The “colored” or “negro” man returned it about an hour later.

Once the body was discovered, Joseph Mosley became a prime suspect. Janie Edwards had been warned by her sister, Maggie Stone, and others that her relationship with Mosley did not look good as Janie had a husband in Chickasha.

The investigation disclosed that Janie had received a letter from her husband in Oklahoma the day of her disappearance asking her to return home. The police theorized that she may have intended to return but was prevented from doing so by Mosley.

Joseph Mosley and Janie Edwards had been seen seriously quarreling near the scene of the crime on Saturday afternoon, August 3rd. At least one gunshot had been heard in the area but no one had investigated.

A person by the name of Joe Mosley, with a wife in Iola, Kansas, had been convicted of first degree armed robbery in 1906 (he used a revolver to hold up a restaurant owner of fifteen dollars). He was captured in Denver, Colorado, and nearly escaped while being returned to Wichita. 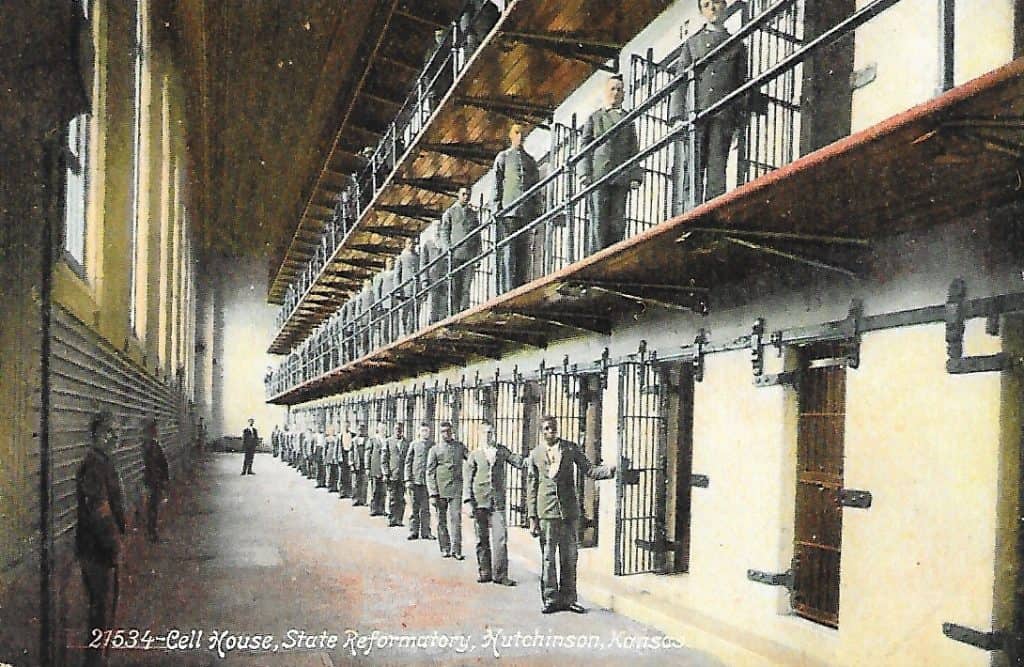 Mosley’s prison sentence was 10-21 years. He was sent to Lansing State Penitentiary, but a year later was transferred to Hutchinson’s reformatory. Within three years he was paroled, which seems odd for such a lengthy sentence.

And in 1912, three years after his parole ended, he was a murder suspect.

The Wichita Police Department made a costly error after developing Mosley as a possible suspect. The chief sent Frank Gardenhire, a special officer and dog catcher, to take Mosley to the station “to clear up the mystery.” When Gardenhire talked to Mosley, the later was agreeable and said he’d jump on his wheel (bicycle) and go to headquarters.

It wasn’t until May, 1919, nearly seven years later that Mosley was captured. He was remarried and living in New Haven, Connecticut. His wife, Josie (Josephine), had gotten worried when her husband hadn’t returned promptly from a trip to Philadelphia. Concerned, she grabbed a photograph from home and visited the city’s police station to see if they could help her. Police soon discovered that her husband was wanted for murder in Wichita, Kansas.

Upon Mosley’s return to Wichita, he pled guilty to second degree murder and was sentenced to fifteen years in prison. Finally, this fleeing felon who had previously been captured by authorities in Oklahoma and Nebraska, only to escape, was successfully transported to the State Penitentiary at Lansing by Sheriff Doug Simmons.

Much to my surprise, the penitentiary couldn’t hold Mosley. He escaped November 30, 1919. He had only served six months of his murder sentence.

Mosley was never located or recaptured. As late as 1943 the penitentiary received an inquiry from an out-of-state law enforcement agency asking if Mosley had ever been apprehended. The record clerk at Lansing had to write back: Mosley “has never been captured.”

I wish I knew more about Janie. Regretfully, in my research of crimes it’s easier to access information about suspects than it is about their victims. As previously mentioned, Janie (Shaw) Edwards was African American, nineteen, from Chickasha, Oklahoma, where she lived with her husband.

Janie was born in Dover, Oklahoma. Her parents died when she was very young and she was raised by her sister, Maggie. When Janie visited Maggie in Wichita, she met Joseph Mosley and was attracted to him. He was probably about ten years older than her and worked as a lawn tender.

I found Janie’s grave site at Maple Grove Cemetery in Wichita. I said hello and asked her how she was doing. I also visited the cemetery’s mausoleum and found one of the people who investigated Janie’s death. In 1912, Police Chief George Cubbon (1856-1931), Caucasian, had helped unearth the murder victim’s improvised grave in the corn patch where her body was discovered.

In life, George Cubbon and Janie Edwards probably never had the occasion to meet. In death their graves are in the same gated community.

If you prefer to listen to my blog posts, you can do so … END_OF_DOCUMENT_TOKEN_TO_BE_REPLACED