I heard that George, fifteen years old, was writing a novel. Being a writer—an author—I was quickly curious. Karen, his grandmother, told me that he had three chapters done.

“Would you like to read it?” she asked me.

“No, but I’d like to meet George and learn about his writing. If he ever finishes his book, there’s a good chance that those first three chapters will be very different. That’s pretty common as books evolve.”

The next day at Bluebird Books, Hutchinson, Kansas, I’m introduced to George and in a flash we’re talking about his fantasy fiction book. It’s set in an alternate version of a town in Italy. George calls the region Vecinaria.

I soon learn that central to the story are two boys who are destined to defeat a demon banished from his own realm.

As George describes his plot and characters I become appreciative of his attention to details. When he introduces me to his characters and how they will offer four different points of view, I’m further impressed. He’s creating challenging work for himself.

“Are the different points of view in separate chapters?” I ask.

“No, I tried that,” he replies, “but whenever I change to a different character’s point of view it’s clear.”

“Good,” I answer and then have him show me some examples of the shifting perspectives.

I ask about the back stories of the characters. I smile and nod when George replies: “I don’t know their back story yet; I don’t know how everyone’s going to fit together yet.”

“That’s great!” I respond. “Novelists write differently. Some people have everything outlined and figured out and others discover a great deal about their characters as they continue writing. It’s a learning process.”

George explains to me that each of his chapters begins from an animal’s point of view. That’s pretty wild, I think. Sure enough, I read the opening paragraph of his novel titled, The Relic of Vecinaria. The writing does not disappoint. Here it is:

On the evening of March, on a cold, late winter day, a rat sat in a dark alleyway, watching the feet of travelers, workmen, and children shuffle by. It was growing dark and the cold of night slowly crept through his fir. The rat crossed the street and descended into a grimy storm drain, landing at the bottom with a subtle splash. It was a much different world below the street; all mossy and wet, and covered in mud. The rat glimpsed the snow starting to fall outside on this wintry day. He caught the rare sound of a car going by on the cobble street. A bell tolled 9 o’clock in the old red tower at the center of the city.

I ask George about his favorite authors and books. To me, his list sounds like the perfect antidote for sleep: horror stories. According to George, Doctor Sleep by Stephen King is the best. It’s the sequel to The Shining. Pet Sematary is another King favorite.

When George tells me about two boys in his novel-in-progress who have super powers—that their parents don’t know about—I blurt out: “that sounds like Harry Potter!” Sure enough, George adds J. K. Rowling and her Harry Potter series as favorites and influencers of his work.

George especially likes the six or seven books in the “Tunnels Series” by authors Roderick Gordon and Brian Williams because they don’t have stereotypical endings. Sometimes characters admired by George are killed and that’s okay with him. Super happy endings are overrated. Plus each book always ends on a cliff hanger.

I ask George if he knows how his book ends. Yes, he knows.

I won’t reveal the little I learned except to say that the final scene won’t take place at a Sunday picnic.

George admits that he’s “a fan of all things Italian” which includes art, culture, and language. He likes his high school English and history classes because of art history which covers the Enlightenment and Renaissance of Italy.

In my writing I do a lot of research but usually it’s from reading a book or searching the internet. So far my most extensive traveling has been a visit to the Colville Confederated Indian Reservation in the state of Washington.

But George will have my distance beat by thousands of miles. He and his family will be visiting Italy! I get excited and promise him that the details in his novel will be tremendously influenced by his geographical and cultural travels. How cool is that?

George’s eyes light up at the mention of Italy. He talks of Florence, Venice, and Medina. He craves the upcoming visits to the Italian car manufacturers of Alfa Romeo, Ferrari, Lamborghini, and Maserati. 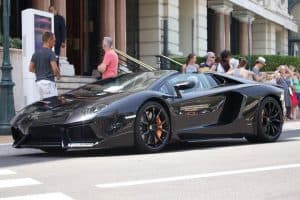 I can see him on the roadway, exploring the possibilities while at the wheel, accelerating at curves, with the pedal to the metal. He’s wearing sunglasses and has a scarf that whips in the wind.

He may not believe in super happy endings in his writing but he sure looks content in his Lamborghini.

George smiles when he tells me that people think he looks Italian. “That’s a good thing,” he concludes.

If you prefer to listen to my blog posts, you can do so … END_OF_DOCUMENT_TOKEN_TO_BE_REPLACED