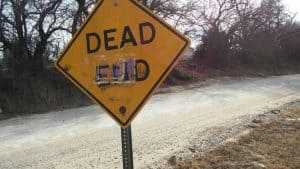 Yesterday morning we received a phone call from a country neighbor.

“Have you been down to your mailbox yet?” she asked.

“Well, if you can get down here, you can see that someone’s run over our newspaper tubes. They look as flat as a pancake. A sheriff’s deputy left his business card in our mailboxes.” 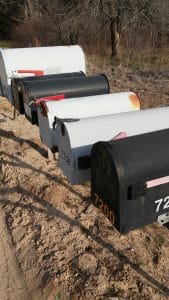 As we approached the dirt road intersection, we saw the downed newspaper racks and one white mailbox on the ground. Large tire tracks confirmed that the damage had been caused by a vehicle, at least the size of a heavy truck.

We talked with our neighbors and tossed around ideas of which neighbor had a truck with duo wheels, who might have been drunk, and who had teenage drivers living in the home. But the tire tracks in the tight intersection showed us how a big rig had turned around after incremental efforts. The smashed property was not vandalism or criminal damage to property. It was collateral damage from a driver attempting to take a cross-country short cut. The driver had learned too late what locals already knew: this was a dead end road.

There was little doubt to us that some semi-driver had been trying to reach his or her next stop after dropping off a load at a nearby manufacturing business. It had happened before; semi drivers using GPS to find their quickest route, sometimes wound up stuck in a pasture while attempting to turn around. 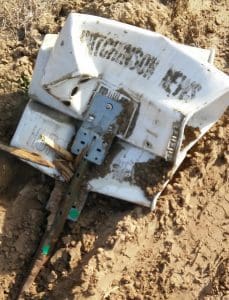 I opened our loose, rusty, tangled mailbox, and picked up the business card. I recognized the name: Deputy Willie Hisle. We had worked together until my retirement two years earlier. . .

Imagine how this brief encounter can be used in your writing. This introduction establishes the setting while layering the information and pacing the story. Rather than a minor case of property damage, it could develop into a major crime with evidence of an error-prone get-away.

What if a pile of individually rolled up newspapers is found in the ditch near the damaged mailboxes? What if you discovered a child’s book bag by a culvert on your walk back home? If it was a kidnapping or homicide, then the sheriff’s officer will visit the local manufacturing plant and question the office manager about early morning deliveries. Maybe the middle-of-the night newspaper delivery carrier has seen the accident and can offer more clues. 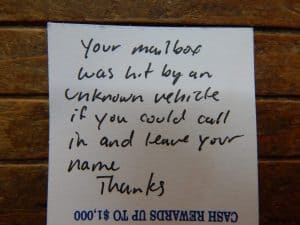 While repairing the mailboxes, more neighbors can visit and learn of additional clues to develop this story. It might be the early pages of a short story or a lengthy novel . . . a novel about a retired cop, once a successful detective, who believes he’s got one more big case in him.

My advice to all writers: Use what you’re given. It’s all around you.

If you prefer to listen to my blog posts, you can do so … END_OF_DOCUMENT_TOKEN_TO_BE_REPLACED