Today the media talks about the alarming impact of “fake news.” No doubt that in our instant, mass communication world, one fraudulent or deceptive story can cause massive confusion with grave consequences.

Check out this “exaggeration” post card from 1937 showing a rather large grasshopper that died of lead poisoning.

Similar manipulated, tall-tale images had been in circulation since the early 1900’s, the Golden Age of Postcards. The popularity of early cards was due to the ability of photographers like William H. Martin (he was the best) to prove a point by producing a picture worth a thousand words.

Farmers especially enjoyed postcards displaying over-sized produce because they could send the cards to family back East as humorous, visual proof of their rich agricultural land keeping them busy and wealthy while harvesting all year round. 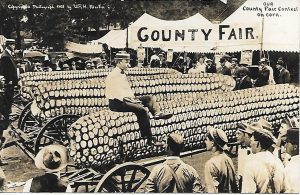 One day during my Master Gardener training (K-State Research & Extension), on the topic of entomology, I was surprised, really shocked, to see “my” grasshopper photo-postcard included in the presenter’s power point presentation!

For fun, the bug expert had included a newspaper headline and story beside the grasshopper photo. In bold print the news flashed: “FARMER SHOOTS 23-LB. GRASSHOPPER!” Reported by Steve Dunlop of Weekly World News, this fabricated story was supposedly from New Zealand.

The opening line is superb! I love this writing! “A 48-inch grasshopper chewed its way through an acre of corn before farmer Barry Gissler drew a bead on the creature with his 30-30 rifle–and shot it dead!”

In contrast, I share my subdued introduction in my character-driven novel, Taking Back the Bullet. “By two in the morning, Jailer Jennings had booked in three DUIs. Eight hours down and four to go before he could go home, catch some z‘s, then return to do it all over again.”

Granted, there is a difference between shock news and literary fiction, but they certainly have one thing in common: There must be a hook, a grabber, a reason for the reader to continue.

At home, on the Internet, I continued reading the supermarket tabloid’s bizarre article about this once ravenous creature. The second paragraph stated: “Now university experts are studying the 23-pound insect’s carcass in hopes of finding out where it came from and why it grew so big.”

I compared my second paragraph to Dunlop’s: “After two years working the jail, Jennings viewed most drunks as clones to their intoxicated peers. He’d heard, ‘I only had two beers,’ so often that he no longer shook his head in disbelief or judged them as desperate liars. Instead, he smiled. It was a joke. Police humor.”

One thing I take from this comparative exercise, is that the writing is similar though the genre is different. In both stories, the writers have created a setting and invite the reader to accept it as real, to enter and continue into a fantasy world.

If the reader is curious, then they will read the next sentence, maybe the next paragraph. They will decide if this is where they wish to spend their time, hoping they can catch a break from the speeding world around them and be entertained for a few hours.

I don’t know if the “reporter” from Weekly World News used a fictitious name, but I know I’d be interested in learning if he, or she, had tips on creative writing or wrote any novels.

If you prefer to listen to my blog posts, you can do so … END_OF_DOCUMENT_TOKEN_TO_BE_REPLACED