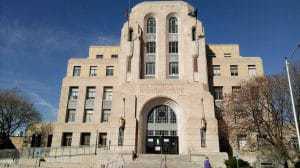 I used to think that being on a jury would be a neat experience. But once I was hired as a deputy sheriff, I knew there was zero chance of that ever happening.

Any defense attorney who allowed a law enforcement officer to be selected as a juror would have to be a candidate for “Worst Attorney of the Year.”

On the other hand, if I was asked if I could be open-minded in a trial, and not be biased against the accused, I believe I would (at least consciously) be fair and impartial.

During my thirty-three years in law enforcement, the clerk of the court dismissed me from my jury duty obligation each time my name arose.

About six weeks ago I received a letter in the mail informing me that I was in a jury pool for the upcoming month, to fill out a questionnaire, and return it. I did.

The questionnaire had asked me about my profession. I answered “Writer” and “former Reno County Sheriff’s Deputy, 1981-2014.”

I never heard back from the clerk of the court so I followed the mailed instructions. Every Monday night for a month I checked to see if I was summoned to the courthouse at 9 a.m. the following day.

When I mentioned to another retired deputy about my obligation and that I didn’t believe I’d ever be selected to be on a criminal jury, he shocked me. He said that he had been on a jury after his lengthy career! “What?” I asked, puzzled.

He explained how a defendant had told the judge that he wanted to represent himself, that he didn’t need an attorney.

Sure enough, at voir dire (the process which essentially determines whether a juror can truly be impartial) the defendant selected his jurors by having them count off by threes and then selected every third person!

According to my former co-worker, the jury found the self-appointed attorney/defendant guilty. It only took fifteen minutes.

At voir dire, the judge is looking for competent jurors while the attorneys are trying to find the best juror for their purpose—winning.

If a prospective juror doesn’t want to be on the jury then that’s a problem for everyone. Of course there are legitimate reasons.

Here are some excuses that I’ve found on the Internet that have been used by people looking to avoid service. Although, I’m pretty sure a couple of the responses are more likely to have been used in a skit on TV’s “Saturday Night Live.”

A male attorney asked a perspective juror, “Have you ever had experience with an attorney? Her reply: “You picked me up in a bar five years ago.”

One potential juror had a scheduling problem: “I have to report to prison next week.”

“The defendant just looks guilty; I can’t be fair to someone who looks that guilty.”

“I brought a note from my mommy.”

One person gave the advice on how to dress for voir dire: “Wear pajama pants.”

All but one of these stories make me laugh, but remember, lying to avoid jury duty is a crime.

Here’s an account of how a person was dismissed from jury duty after pretending to be “mentally unbalanced.” She then made the mistake of bragging about her elaborate plan while on talk radio.

“She left her hair rolled in curlers of different colors, shapes and sizes, slathered on ‘excessive’ makeup and dressed in mismatched shoes with holiday reindeer socks and a T-shirt with ‘Ask Me About My Best Seller,’” the affidavit said.

She was charged with felony perjury and attempting to influence a public servant.

On another occasion, a judge had heard one too many excuses during an already long day. He found the story of one perspective juror “unbelievable.”

As punishment he ordered the person to attend the trial every day as an observer—without pay.

If you prefer to listen to my blog posts, you can do so … END_OF_DOCUMENT_TOKEN_TO_BE_REPLACED