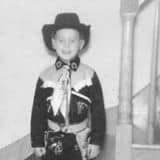 I grew up watching black and white TV. Actually, it was more like white TV in the sense that people of color rarely appeared. In the early days of television, until the last half of the 1960s during the push for civil rights, the little screen showed very few African American faces.

There were a lot of westerns on the tube back in the late 50s and 60s, including Hopalong Cassidy, Gunsmoke, Wagon Train, and Have Gun Will Travel. My favorite show was The Lone Ranger.

The Lone Ranger was about a (masked) law man and his loyal companion—Tonto—an American Indian, who fought bad men in the Wild West. The TV Ranger was played by Clayton Moore, Caucasian. Jay Silverheels, Mohawk from the Six Nations Indian Reserve in Canada, played Tonto.

I was mesmerized by the weekly television show and imagined myself fighting for justice, helping the weak against unscrupulous bullies.

As an adult I was saddened to learn that the word Tonto was translated in Spanish as fool, stupid, or dumb. Surely, that wasn’t done on purpose, I hoped.

But I did laugh out loud when I read that one of the many theories about the term “Kemo Sabe”, used by Tonto to refer to the Ranger, (in the Apache language) meant idiot, not “trusty scout”.

Recently I’ve learned there are conflicting stories about the origin of the fictional Lone Ranger. To me, the most plausible is that the character was based on the career of US Deputy Marshal Bass Reeves (1838-1910).

Reeves was a lawman who rode a grey horse (The Lone Ranger’s horse, Silver, was white) and sometimes worked with an Indian scout (like Tonto), especially in the Indian Territory (now Oklahoma). Instead of a trademark silver bullet, Reeves left behind a silver dollar as his calling card.

However, while the fictional Lone Ranger was white, the real Bass Reeves was black, and his true-life story was much more spectacular than any TV series.

Reeves was born into slavery in Arkansas.

When Reeves learned of the Emancipation Proclamation (1863), he was serving his master, a colonel in the Confederate Army. Bass escaped to the Indian Territory where he was embraced by the Cherokee, Seminole, and Creek Indians.

In 1875 he was hired as a Deputy US Marshal to help tame “Indian Country”–one of the earliest black deputies to serve west of the Mississippi River. At the time he was already a physically imposing man, fluent in Native languages, and a crack shot. Soon thereafter, he became an expert in apprehending fugitives and outlaws.

He reportedly arrested 3,000 outlaws and killed fourteen men in self-defense during his 32-year career. Just as amazing, was his sterling reputation.

I don’t know how many gunfights Clayton Moore was in during the show’s eight seasons, but Bass Reeves’ obituary described him as “absolutely fearless and knowing no master but duty.”

Looking back to when I was growing up, I wonder how receptive I would have been to a black, not white, Lone Ranger on TV. I don’t think it would have made any difference to me, but I’ll never know.

Like millions of children–black, brown, and white–I never had an opportunity to find out.

If you prefer to listen to my blog posts, you can do so … END_OF_DOCUMENT_TOKEN_TO_BE_REPLACED