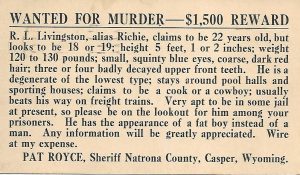 I’ve been collecting “Reward” postcards since I was first hired by the Reno County Sheriff’s Office (KS). I find the descriptors fascinating. Most of these penny postcards were quickly printed and mailed once a criminal offense was reported to local law enforcement. Of course, this was in the day long, long before instant communication. The sheriff told the receivers of the card (other law enforcement agencies) that he could be contacted by wire, meaning via telegraph.

When a postcard would describe a stolen horse or an escaped prisoner, often there was no photograph to accompany the best description authorities had on hand. These cards, without photos, are often the most interesting to me because I enjoy reading the words and attempting to physically reconstruct the crime and the outlaw.

My favorite postcard was sent by the sheriff of Natrona County, Casper, Wyoming, in 1920. The wanted man, with the alias of “Richie,” is called a lot of things, including “a degenerate of the lowest type,” and “has the appearance of a fat boy instead of a man.”

It’s humbling for me to recognize how this information-packed postcard has created a better, fuller description of a person than I’ve created in a complete novel of characters! I’ve got so much to learn.

When you read the postcard, did you blink your orbs upon reading of his “squinty blue eyes”? Did you roll your tongue after reading that “Richie” had “three or four badly decayed upper front teeth”? I imagined this guy beating his way on to freight trains, then I conjured up a bigger bully with a bigger club.

Not only does this postcard give an excellent example of how writers have an opportunity to fine tune their literary characters, it also creates a setting from the past. Imagine the year 1920 in Casper, Wyoming. Those were some rough times, especially around the oil fields.

If you were writing a historical novel, would you show “Richie” escaping on horseback, jumping a freight train, or driving a stolen automobile? Would “Richie” be captured or get away?

If you’d like to create your own short story using the details of the above postcard, I’m interested in hearing your version of his escape, capture, conviction, and/or prison sentence. After extensive historical research, I’ve learned those details and much more, including “Richie’s” real name.

Whether you use this as a writing exercise, or use it to jump-start a novel, good luck imagining.

If you prefer to listen to my blog posts, you can do so … END_OF_DOCUMENT_TOKEN_TO_BE_REPLACED