· “A Day I Shall Never Forget: Citizens Bank Hold Up” ·

There are people in the world who crave to have their fifteen minutes of fame. They wish to be widely recognized for attaining a personal achievement or for participating in a spectacular event.

That was not the case for Bessie Olson when on May 28, 1924, she was working as a cashier in the Citizens Bank of Lamont, Oklahoma.

At about noon, Bessie was helping a customer, Chad Chadwick (or Chadwell), scotch taping his torn check when an infamous criminal walked into the bank.  According to Bessie, “the bandit came in, shoved a Colt .45 into Chad’s side and ordered, ‘You two get into the vault.’”

When Chad was unable to immediately open the gate to gain access, the maskless armed robber pointed his gun at Bessie and demanded, “Come open the gate!” Bessie looked at the criminal. He said, “I won’t hurt you if you do what I tell you.”

Chad and Bessie “ran into the vault” and the robber locked them inside. Then he took the money from the drawers at the teller windows and five hundred dollars in dimes from a white safe near the vault.

Cashier George Cowen was in a back room when he heard the dials of the vault click shut. This was unusual because normally the vault was kept unlocked during banking hours. When George investigated, the robber was leaving in the same car that George had observed parked beside the bank when he had returned from lunch. He recalled there was a man dressed in dark brown coveralls working on the car, an Essex.

It wasn’t long before the sheriff learned Jeff Duree, a well-known criminal specializing in middle-of-the-night bank burglaries, had been released on an appeal bond three months earlier from the Leavenworth Federal Penitentiary. He had been serving a 25-year sentence for robbing a Santa Fe mail train near Edmonton, OK.

After Sheriff Hamilton received a description and photograph of Jeff Duree, Bessie Olson and Chad Chadwick both agreed that the Lamont Bank robber was Duree. A warrant for Jeff Duree was then secured by the sheriff.

A little over two months later Jeff Duree, one of his brothers, and a brother-in-law (or should I say brother-in-crime?) were involved in a shoot-out with a posse of peace officers from Chautauqua County, Kansas, when the lawmen attempted to capture the outlaws as they camped about nine miles southeast of Grenola, the home of the Duree’s.

One bandit who the lawmen thought was Jeff Duree, was killed, shot through his eye. Sheriff Hamilton, Bessie Olson, Chad Chadwick, and George Cowen traveled to Sedan, Kansas, to view the body of the fallen bandit at an undertaking establishment where the witnesses identified the lifeless body as the man who had robbed the Lamont Bank.

Seventy years later, in a handwritten two-page memory, titled “A Day I Shall Never Forget,” Bessie wrote: “We went to the Sedan Mortuary to view the body. I said he looked like the man who robbed us. Chad also said there was no doubt in his mind but this was the man who locked us in the vault.

“We were wrong! The man that was killed was Jeff’s brother, Charlie—Jeff and Brother in law escaped.

“A year later in 1925 a ‘Phantom’ Jeff Duree was found in Phoenix, Ariz. robbing banks—

“He was sent to Leavenworth Kans.

“He was never tried on the Lamont Okla. robbery—”

At the time of the Lamont Bank robbery, Bessie Olson, 22 and single, was living in town, helping care for her mother, Clara Olson.

Being robbed at gunpoint and locked in a vault by a perpetrator would be unnerving enough for anyone, especially for a young woman growing up in a small town. But Bessie wasn’t allowed to forget her stressful encounter. Newspapers reported how she had identified the wrong man twice, including after viewing his corpse. More than likely, the public had a simplistic understanding of the circumstances.

Most people never experience being on the wrong end of a Colt .45 during an armed robbery. A positive identification by witnesses, even today, is overrated for many reasons, especially when an official suggests a particular conclusion. In the case of Jeff Duree, Sheriff Hamilton told the witnesses, prior to the car’s arrival in Sedan, that the deceased person they were going to identify was Jeff Duree, the robber of the Lamont bank.

Bessie, Chad, and George had additional challenges in the identification process. Jeff and his brother Charlie had similar physical characteristics, plus, when Charlie’s body was examined it had already been disfigured from the fatal bullet through his eye that caused swelling. 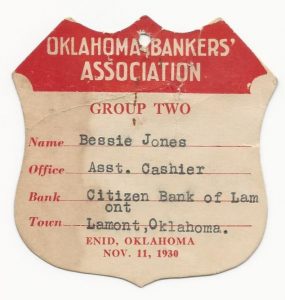 Bessie also faced the reality that a dangerous career criminal was alive, he might hold a grudge against her, and he or an associate could easily return to the bank where she continued to work—until forced to close by the economic conditions of the Great Depression.

Jeff Duree must have been born with one foot pressed to the floor of an automobile’s gas pedal and a hand gripping a pistol. And while escaping from lawmen, he likely became an expert at using the automobile’s rear view mirror. Even when Duree was elderly, the lure of free money outweighed the risk of imprisonment in the Big House.

Duree was released from federal custody in 1939 after serving nearly fourteen years behind bars. In the mid-1940s he was arrested again. This time for robbing a U.S. Post Office at Copan, Oklahoma. He was sentenced to another five years, and paroled in 1944.

In 1955, Duree was charged with burglarizing a bank in Hepler, Kansas. In 1958 he was wounded by a Tulsa police officer after burglarizing a supermarket. The same year, at age 65, he robbed the State Bank of Peru, Kansas, in broad daylight.

Bessie Olson coped with her bank robbery memory. Yes, it was a stressful event in her life and she never forgot it, but she refused to be defined by a single day. Because of her teller job at the Citizens Bank of Lamont, she met her future husband. Bert Jones, a Lamont merchant who dropped off deposits from his dry goods store, met the attractive bank teller in 1926. They married a year later in Wichita.

After the bank and the dry good store were forced to close due to the Great Depression, Bessie and Bert moved to Enid Oklahoma.

I had the good fortune of meeting John Jones in 2018 during my “Reward Postcard” presentation at the Wichita Postcard Club show. While sharing the postcard image of Jeff Duree with the audience, I read them this caption:

“Noted bank robber. With a history as long as the life of Moses.

“He is now doing time in Leavenworth Kansas Penitentiary for bank and train robbery.”

That’s when John Jones told the convention audience about how his mother, Bessie Olson, had been a bank teller in Lamont, Oklahoma, in the early 1920s when Jeff Duree held up her bank and forced her into the vault.

In 2019, I had the pleasure of seeing John again, this time meeting his wife, Joyce Jones. I asked the married couple how they remembered Bessie Olson Jones.

Without a second’s hesitation they replied in rapid fire fashion: “She was a very Christian lady, family oriented, friendly, outgoing, kind, caring, never met a stranger, loved to cook for others—especially pies and cakes, entertainer, very humble, grateful for what she had, she wasn’t bitter, not materialistic, and she liked to dress up.”

One strong memory stood out. Whenever Bessie had a visitor, her greeting was always the same: “Oh, what would you like to drink? I’ve got some pie.”

Thanks to John and Joyce Jones for sharing their documents and memories with me, especially a two-page memoir, “A Day I Shall Never Forget”, written by Bessie Olson Jones in 1994.

If you prefer to listen to my blog posts, you can do so … END_OF_DOCUMENT_TOKEN_TO_BE_REPLACED